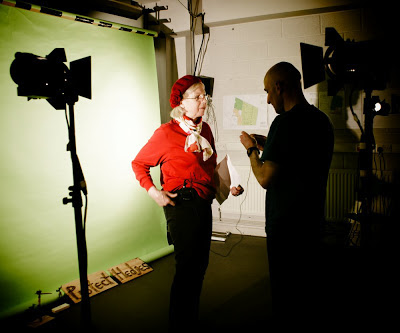 Ignite Somerset along with ARTlife had invited Somerset artist's working on projects associated with the Romantic poets to talk in front of a green screen at the Engine Room Bridgwater. The premise was simple, Richard Thomlinson (of Ignite Somerset pictured above with Lynn Mowat) had prepped the Engine Rooms studio with a floor to ceiling green screen, camera, microphone, lights etc and artist's were asked to book a slot and then talk about their projects straight to camera. 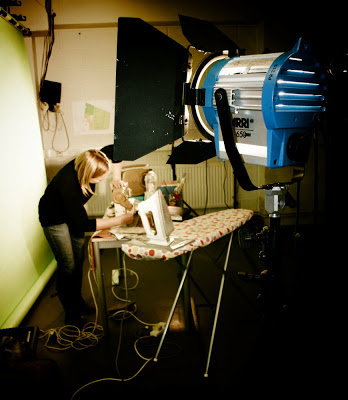 Amongst other artists attending were Alice Crane, pictured above amidst filming, she was talking and sewing at the same time, a task which was harder than expected - even after years of practice. Ralph Hoyte (geolocated sound-scapes, Satsymph - pictured below) and Frances Harrison (storyteller and visual artist also below) have major projects in respect to the Coleridge Way. In many ways Frances, Ralph and myself are the three corners of the current Coleridge Way projects and the meeting was for me an essential piece of networking. Touching base and choreographing (in the loosest sense) how our works fit together in a wider scheme.


At lunch time Richard screened three short films to the Artists present, one about each of The Colridgeons (I know, there is no such word) which we had made with Richard in the last few months. I always feel very self conscious about this kind of thing even in good company, but there was nothing to worry about, and it was brilliant to catch up with others, many of which are working in parallel towards the ever present yearly event of Somerset Art Week. 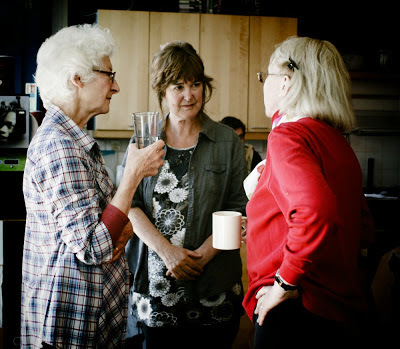 The Engine Room is a stunning facility and in this age of media where we are surrounded by screens at every turn, it makes the essential bridge between the artist and the technology, something which always seems to be shifting, never solid and simple like a canvas or a book. I have always tried to embrace the new but there is a point where you try to take stock and ask simple fundamental questions like, does this effort actually add to my creative practice, is it worth the hassle, toil and energy? What is the life span, who am I connecting to, will it be gone in a moment like twitter, or around for decades? and am I happy with that, is there another way?


These are impossible questions to answer, and only in hindsight will we know truly the longevity of energies spent and where possible economies were to be had. In the mean time we have to embrace every opportunity on offer, give a little of our time and enjoy the simple things like chatting over coffee, and connecting to others who have climbed a different tree of craft to your own. Build connections, collaborations, try and be at the centre, and catch those opportunities right now whilst the camera's are running.

These works will be posted through the Ignite Somerset site.
Posted by Jelley at 12:33 No comments:

Word Harvesting along the Coleridge Way

I've been desperate to write about this day just before Easter, a day whose weather was so caustic that it felt endless, and all the stranger now sitting here with the sun shining! So just to re cap, I have worked with three First Schools in West Somerset, all are in the curtilage of the Coleridge Way. Nether Stowey at the head, Porlock at the tail, and Dunster, well a little off mid way, but the concept was simple, take a group out into the landscape and write words which reflect that experience in much the same manner as Coleridge and Wordsworth.

In some ways, the extreme weather, (and yes it was mad for all three separate days and schools!) was just the ticket, they needed something to write about and Cold, Icy, Fresh, Tingly, Breezy, are all in the mix.

These images here are from Porlock First St Dubricus School, who braved the weather up Webbers Post (Beneath Dunkery Beacon) This path is great, and a regular destination for St Dubricus, but as I drove over that morning I thought it was surly going to be cancelled, the rain was deep, the hills shrouded in mist, puddles right across the road. But no, the head master Mr Blazey was adamant that it would all pan out fine, and then he added that this was the walk they did when the weather was too bad at Pinkery Pond up on the Moors! When it comes down to it, the school know the limitations of their pupils far better than I do which is rightly so, and I am so pleased that we could go, as the old adage goes, 'there's no such thing as bad weather, just poor clothing.'

So the van dropped off the first party who thought that there was not enough water in the air so did some puddle jumping, and proper splashing. With that out of their system we were straight into word harvesting, what do you hear, feel, smell, what can you taste on the rain? And the kids were even more prolific than the clouds, for they poured forth endless phrases for us to jot down, faster than we could write.

Well we did have paper to write on but that soon turned to pulp, but by chance the clip boards were wooden, and not wanting to halt the kids flow, we just started to write on them, which oddly enough got better in the wet rather than worse. It reminded me about the great space race of the 60's, (before my time I know) where the Americans spent a huge budget in developing a biro style pen which would work in zero gravity, but the Russians just used a pencil! Doesn't rain in space though!

So the day went well, the first session harvesting out in the wilds, the afternoon writing up and working on their phrases. Jenny had a good structure for this, building in metaphor and simile into the structure of their writing, taking the ordinary and making it more, building, improving. 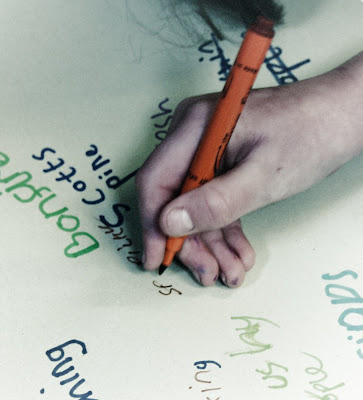 So many thanks Jenny (Mrs Mash) for leading all the sessions, and thank you to all three schools for letting us loose in the wilds of Exmoor with their precious pupils. The poetry is all complete and I am just spell checking and proof reading to make sure that it's perfect before I etch the poetry into slate for re installation along the Coleridge Way. But you'll have to read other blogs for those details as I think that's plenty for one blog.