All the story boxes are out in the field now and I wanted to create a film which evoked the mood of reading and writing, of discovering and then entering into a tale. The opening shots are filmed at Coleridge Cottage Nether Stowey, the weather was glorious and I had the garden to myself. So I set out all the boxes in the Arbor and started some filming, but no sooner did I have the camera out than I had people looking and opening the boxes (which is what they are about).

A few conversations later, and I picked up the camera again, just to put it back down and to talk some more about the authors. One couple who had enjoyed the house and ready to move on asked me briefly about the boxes.

'They are story boxes' I proudly said.

'Oh she replied, my husband Ken is a story teller.'

Well perhaps before you leave you might like to read this one which is started by Taffy Thomas?'

'What, thee Taffy Thomas?' they said in unison.

The other major author is Jackie Morris, and her tale is magical, which also includes an illustration of a fox. (I have included paints in some of the boxes but not this one as I want it to stay really nice!) It was last seen at Coleridge Cottage in the clutches of a woman who was so attached she couldn't put it down to let the next walker write their piece, (she might still be there!) 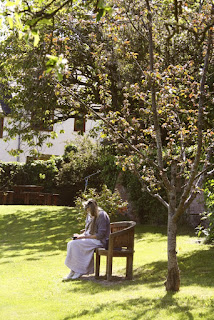 Caroline Taylor (Assistant house manager of Coleridge Cottage NT) has started another, and of course I have done one too. The words in the film are mine and from the 'Watery Lane' story box, this place seemed just right for a Goblin Market style poem, or at least the start of one.

So now they are out, all in the wild, with tales to be guided and penned by wandering souls, some will stumble upon them, others hunted out. Some will be visited again and again, others more sparingly, but in September they are to be exhibited firstly at Porlock Arts Festival then in Dulverton for Christopher Jelley's Somerset Art Week, and finally at Coleridge Cottage itself in the garden room if all goes to plan.

So hunt them out, read, write, enjoy and let me know how you get on, and if you twitter use #storywalks, and here is a map to story box locations so you can plan your trip.