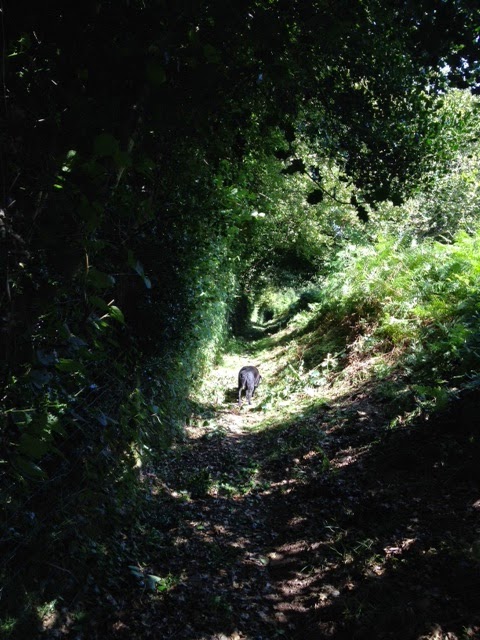 Mr Jelley has been out along the Coleridge Way with his faithful companion 'Fable', this time between Alfoxton Park and St Audries bay, passing through sleepy dells and heathland searching out the finger posts to affix the QR code poetry. 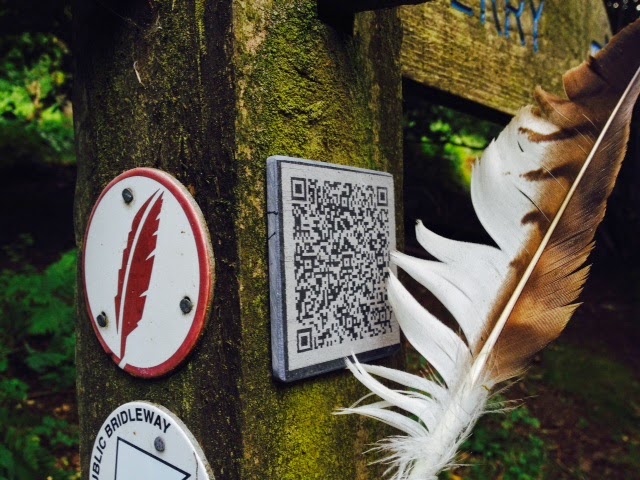 What is a QR Code?

Very simply it's like a bar code but it has characters aswell as numbers, and you can decode with a simple scanner (most people use a free app on their smart phone and turn their phone into a scanner.) Once scanned your phone just decodes the pattern back into the characters - ie text ready for you to read. People often miss understand QR codes, thinking that they need to be connected to the internet but this is not the case, your phone decodes on the fly, revealing the hidden text no matter where you are, they would work even on the moon! 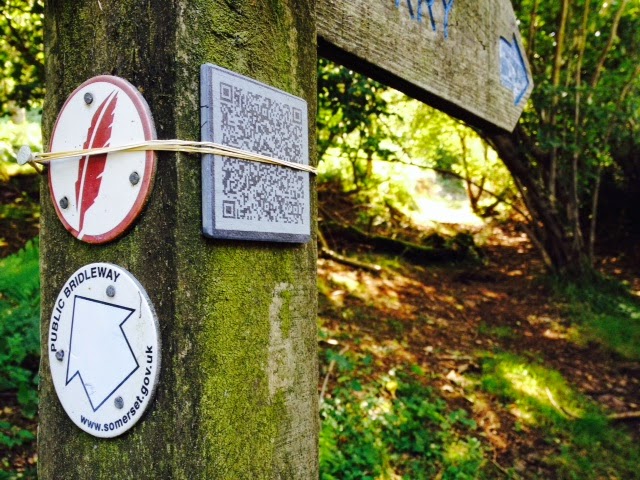 The poems were written by local school children during special workshops commissioned by ARTlife. Every child either walked the Coleridge Way or adjacent countryside with Mr Jelley and Mrs Mash, firstly word harvesting and then later crafting their own words and phrases over just a single day. Mr Jelley then took the poetry away, laser etched it into slate and has been attaching them to finger posts along the trail over the summer and into this autumn 2014. 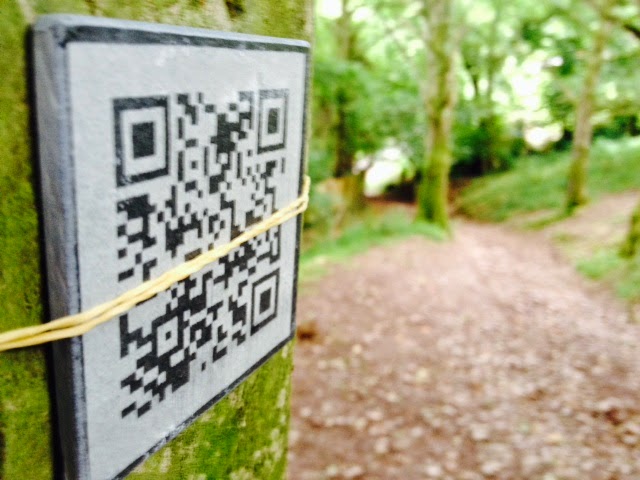 Sections from Wheddon Cross to Porlock have been completed as well as Sampford Brett to Monksilver, and Nether Stowey up over Watery Lane. More sections are due to be completed in the coming months to create a QR code poetry trail.

How are they fixed?

First nails are hammered into the timber then a high quality epoxy glue is used to attach the tile to the nails, this means that the finger post can breath and the tile remain in place for years to come. The rubber band is there to hold the tile in place whilst the glue sets and is removed after half hour or so.

How many schools have been involved?

This year there were five schools in all, and each within the curtilage of the Coleridge Way. The pupils were aged between 6 and 11 and we tapped into their literacy skills to gather site specific poetry inspired by the Coleridge Way trail itself. Understanding children's capabilities at this age is quite a skill and it was great that Jenny Mash, local teacher and artist was on board. 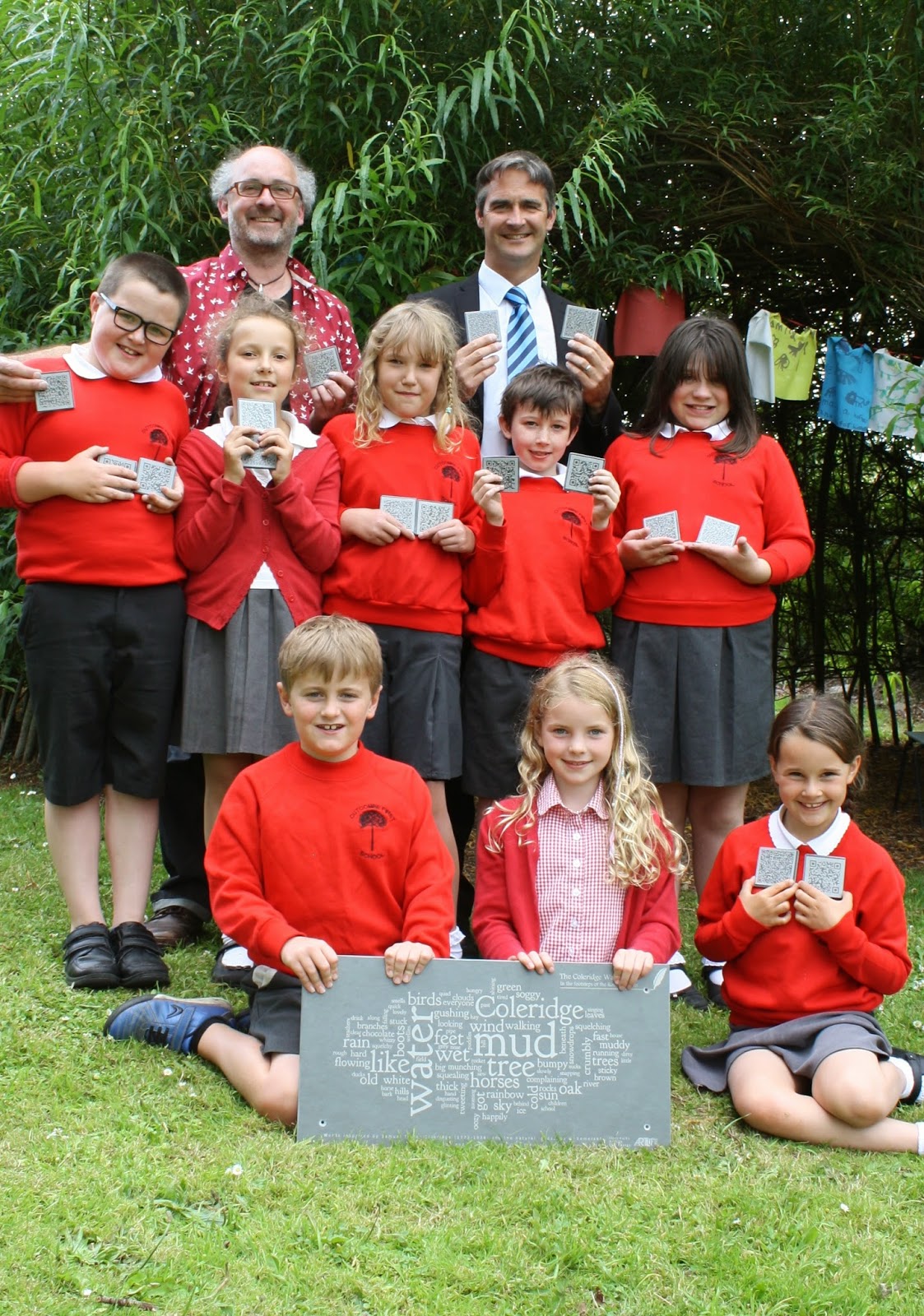 '[the project] wouldn't have come together without Jenny Mash, her skill base in understanding Key Stage 1 and 2 literacy was absolutely crucial to obtaining the best from these little authors .'

Each school received a plaque of laser etched slate with a word cloud (pictured) depicting their pupils words. Presentation of the slates to the children connected them with the project as a whole, and they were also able to scan lots of the QR code poems before they were mounted along the Coleridge Way trail.

More sections of the Coleridge Way will have tiles installed over the coming months, so don't forget to add a scanning app to your smart phone before you depart on the trail.