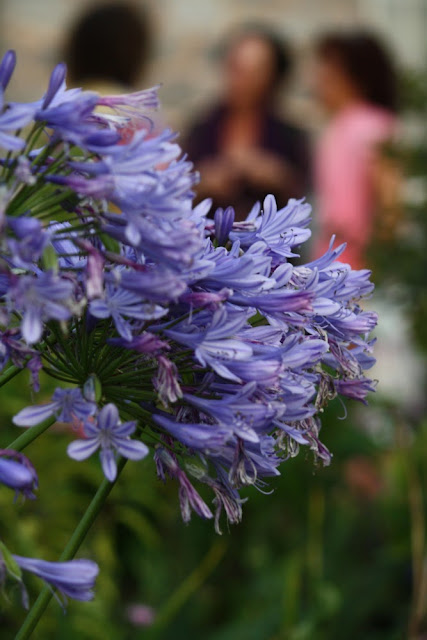 Last night Binham Grange was host to Ralph Hoyte's Epic 'Christabel Released', the evening was part of the Gallery4Art exhibition which built upon last year's successful show of new art works by south west artists. Binham Grange is in a stunning location, nestled between Blue Anchor bay and Old Cleeve, it's fabulous gardens and medieval rooms, sensitively brought back to life by the current owners, were the perfect backdrop for this Gothic epic - the Alabaster door frames being something to behold in their own right.

The performance began outside in the evening sun, then parts two and three continued inside, firstly in the grand dining hall, and then finally with coffee seated on soft sofas in the more snug sitting room. 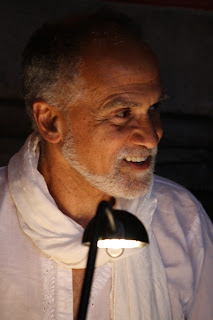 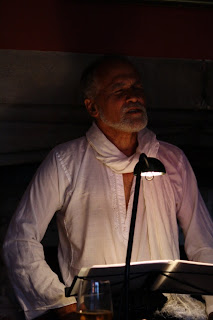 Ralph explained how he had originally fought with the idea of finishing Coleridge's unfinished 'medieval' tale of demonic possession but whilst as artist in residence with the Quantock Hills AONB he was more and more immersed in the famous poet's world and simply had to go where he was creatively being led. So as the evening sun set we sipped wine as Ralph began his and Coleridge's epic with the added challenge of spotting the join!

Ralph's reading was three hours in total, which is quite some task to stay focused and fresh throughout, but he made it seem effortless. Moving the audience and allowing us time to eat our picnics between the different locations made the evening move swiftly and also enabled us to see more of this fine Jacobean house.

When the evening drew to a close there was a relaxed discussion about Ralph's work, the other poets and writers that had influenced his ending of Christabel and whether he would be taking on other great unfinished pieces - to which he replied that he was ready to find his own 'modern' poet's voice once more.

Ralph is also currently working on his GPS app that will  re introduce the voices of the Romantic poets back into the Somerset landscape in which they lived and roamed; this is planned for release next year and you may read more about this project in an earlier post here.

If you were unable to attend this event and are curious to what fate awaits Ralph's Cristabel - will she do an 'Ophelia' and what becomes of the snake like, bi-sexual Geraldine, then you may purchase the poem for your Kindle and read it at your leisure - do visit Ralph's website for further details.

Here are three dates for your calendar to drink in the Coleridge Culture. Firstly Ralph Hoyte, who has been working on his Coleridge Conversations App, will be reading his poem Christabel Released at Binham Grange during their annual Gallery4art exhibition. This is how they describe this year's summer exhibition -

Imagine art as a box of chocolates, some highly coloured and decorated, some plain and elegant, some are your favourites, others provoke new experiences and sensations. For the contemporary Summer Exhibition at Binham Grange this year Gallery4Art will present a spacious barn full of art to engage and intrigue the visitor. Each artist will have space to tell a story, to add a fresh dimension to the exhibition where they can display new work and old favourites for people to enjoy. There will be a range of work to suit all budgets from small prints to wall size artworks, delicate ceramics to large animal sculptures.

Tickets are priced at £8/£6, bring a picnic or order from the Binham restaurant. Ralph's epic poem will be performed by him on the evening of 28th August, the art and artists will also be open for you to view and meet during the evening. If you are unable to attend on the night snippets of Ralph's sound installation ‘Romantic Litscape’ will be accessible throughout the exhibition duration.

During Somerset Art Week in Dulverton Frances Harrision has an Illustrated Talk -  'the Sublime and the Beautiful' which is about art, literature, Romanticism and it's influences. The event is to be held at Dulverton All Saints Church, on September 27th starting at 7pm, with tickets £5 purchased from SAW or on the door. Wine and refreshments will be available. Frances is also Venue 24 for Somerset Art Week, so have a look here for more details.

And finally also in Dulverton at Somerset Art Week's Venue 23 is Christopher Jelley's Coleridge works, much of which has been blogged about here so do enjoy reading previous posts to get a feel for the work that will be on show - Number Seven will be hosting this event.


'Behind the gaol door, in the room beyond, Christopher Jelley will have a curious mix of work that defies simple classification'

Amidst these projects will be his Coleridge Way QR Code Poetry Slates, many of which now installed along the Coleridge Way, and also the story boxes which have been out along the trail throughout the summer. Other pieces of his including the site specific Storywalk 'The Watching Way' which starts in the town and finishes out in the hills somewhere! The exhibition is a mix of high and low tech, with an interactive twist so do pop along and step behind the gaol door...

I am sure I will be reporting on these events, so if you don't get a chance to attend then check back here later on.